Last week, the 69th session of the Students' United Nations (SUN) took place at the Geneva International Conference Centre (CICG), where more than 300 students gathered to debate for three days. In the framework of its partnership with Switzerland for UNHCR, the SUN Committee chose the theme of forced displacement for its traditional current affairs resolution.

Laetitia Colucci, President of the Committee, describes the SUN like this :

The SUN is a simulation of the UN General Assembly for secondary school students, mainly from Geneva and French-speaking Switzerland, with some classes from St. Gallen and the Swiss School in Rome. Created as an association, we have existed for 69 years now.

From the strict observance of the debate procedure to the attire worn by the students turned diplomats for a few days, and to the rhetorical jousting, the simulation seems true to the original. However, what this educational and playful framework also allows is to debate the current events that these young people are experiencing, and the future they see on the horizon. Representing one's country, of course, but also representing a generation and expressing one's opinion on the issues of concern to it. Hovig Etyemezian, UNHCR's Head of Innovation, who had the honour of giving the opening speech at this 69th session of the SUN, explains :

Informed debate and action-oriented commitments have the potential to help address the advocacy and funding challenges that confront the humanitarian response. 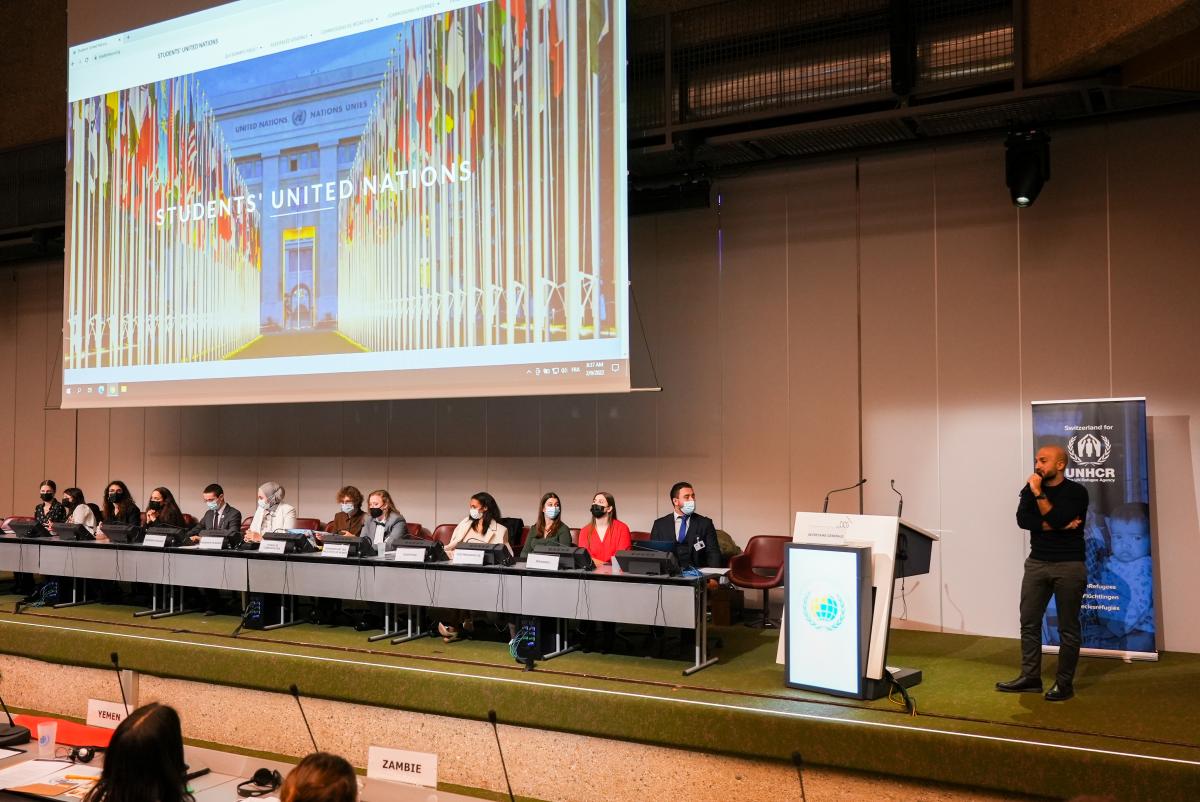 For the opening speech of the 69th edition of the SUN, Hovig Etyemezian answered the students' questions. ©SwitzerlandforUNHCR

The commitment of the participating students was as visible as it was audible, with each delegation using every possible means to make its point.  Yet, in the midst of this energetic debate, the search for and proposal of solutions was central to the participants' efforts. Trying to convince, and accepting to be convinced, was also one of the features of these three days at the CICG. Hovig Etyemezian adds :

The idea of teamwork and creative thinking as a means of solving complex problems relates both to the work of my department and to the SUN.

Thus, this simulation of the UN General Assembly can be seen as a breeding ground for creativity in addressing the world's challenges. This passionate gathering not only explains the commitment, year after year, of the organisers, colleges and students, but also its importance as a platform for young people to imagine the world of tomorrow.

Nicolas and Aleksandra, two students from Collège Calvin in Geneva representing the Albanian delegation during the SUN, took the stage on the second day of debates to defend their topical resolution. Current affairs resolutions are submitted within the framework of an urging issue chosen by the SUN Committee before the event. In view of the partnership between the SUN and Switzerland for UNHCR, the theme of forced displacement was chosen this year. Nicolas explains :

We thought it would be important to talk about "climate refugees" - we went to the UNHCR website and saw that there was a lot of information about the link between forced displacement and climate. So our resolution proposes to establish a "climate refugee" status for those who are most affected.

The drafting of the resolution needs to strike a fine balance between style, verifiable data, and the position of the country represented. It thus requires real research work during which the students are confronted with new information or are stimulated to deepen their knowledge. 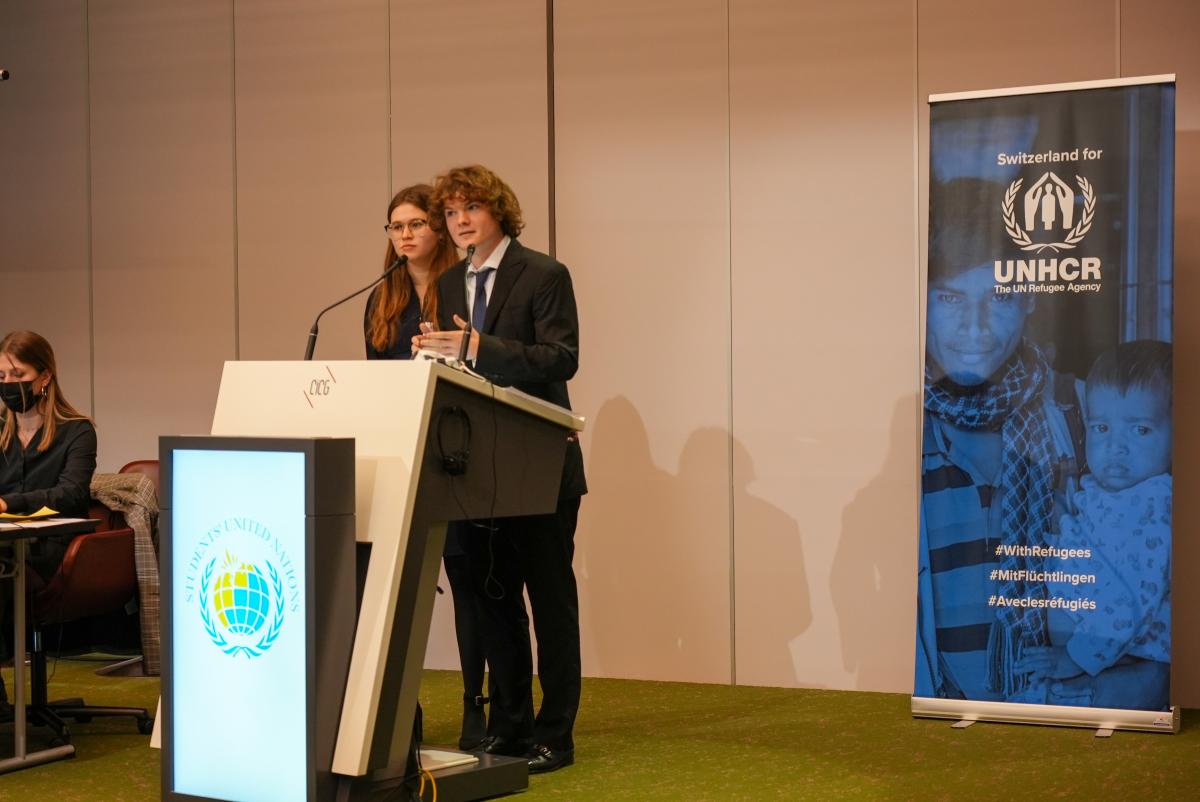 Nicolas and Aleksandra defended their topical resolution in front of over 300 students. ©SwitzerlandForUNHCR

Honestly, I think we've all heard about forced displacement issues before, whether it's on the radio, on TV, from relatives or on social networks. But the most important contact we had was in a geography class where our teacher took the time to explain the distinctions between the different statuses of displaced people, and the debate on weather-related displacement that emerged. I think most people our age are sensitive to this debate, to the climate issue and its consequences.

At the end of the 69th session of the SUN, the two students were satisfied: their resolution was accepted by a majority of the Assembly.
In recent years, the effects of global warming have been felt more and more, especially by those forced to flee. Among the regions hardest hit by the effects of climate change are Afghanistan, Bangladesh and the Sahel. With already vulnerable displaced populations now facing an increasingly hostile environment, the threat of entire populations fleeing their uninhabitable lands is becoming more of a reality every day. Hence the importance of having this kind of debate today, as underlined by the Committee's President :

Internally displaced persons and refugees, who could be called "climate refugees", do not have the same rights as refugees and often have no legal status at either national or international level. International institutions are still looking into this issue but do not necessarily have an answer. The students have understood this and have tried to provide a solution to fill the gaps that currently exist. 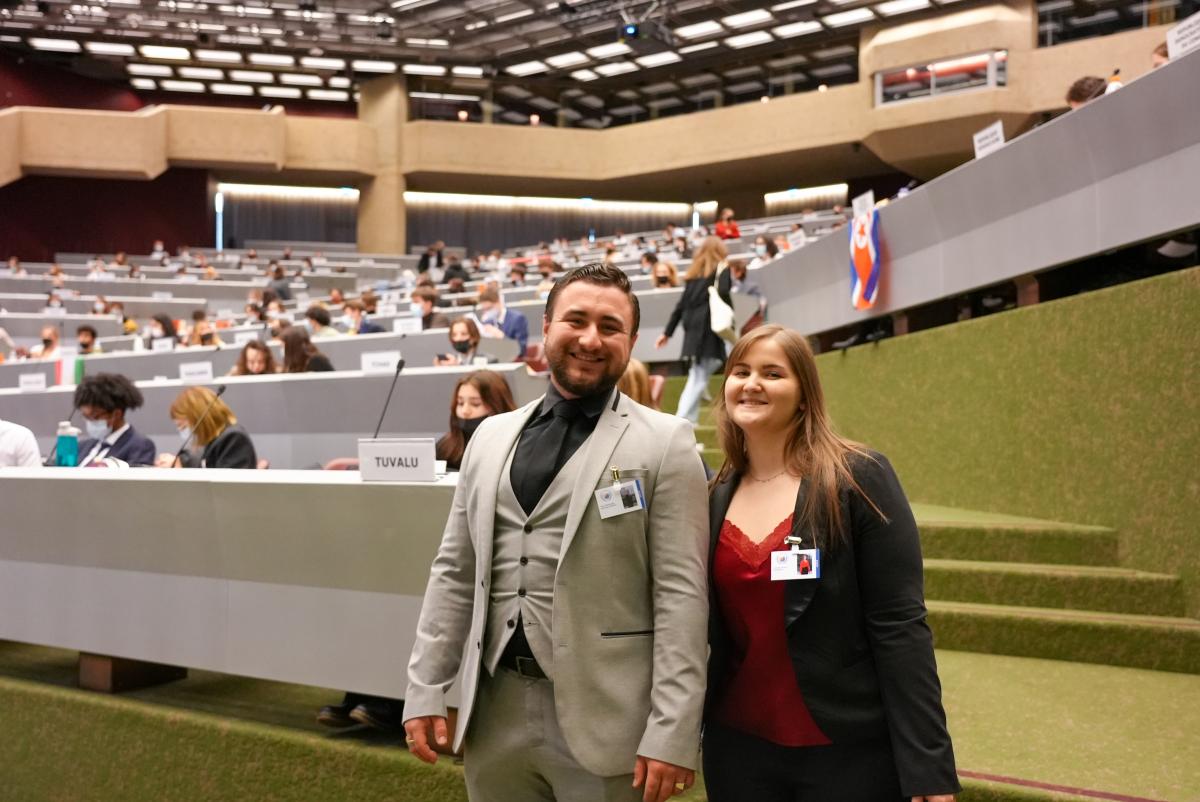 The UN High Commissioner for Refugees, Filippo Grandi, has already previously been asked about the need for a status for “climate refugees” :

I don't think we need a specific status for climate refugees. We already have a Convention relating to the Status of Refugees which defines very well what international protection should be in this area. There are also other instruments that provide protection to people in distress, and they can apply to climate induced displacement.